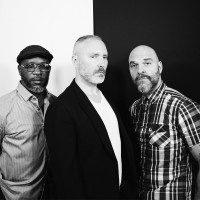 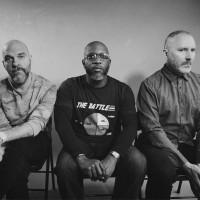 Never Stop II is the 13th studio recording from The Bad Plus, and the first featuring pianist Orrin Evans alongside founding members Reid Anderson (bass) and Dave King (drums). It is a rebirth and also an affirmation between three musicians, enriching the trajectory of this 18-year-old band and its longstanding commitment to creative group improvised music.

Upon the departure of original pianist Ethan Iverson, Anderson and King asked longtime friend Orrin Evans to join the band. Says Evans, “This band feels like family to me. The music has a lived-in quality because of the deep relationships between the band members, and I feel really comfortable within this democratic construct.” Evans has been a vital contributor to the modern jazz landscape for more than 20 years with his solo projects and other groups.

Never Stop II features four original compositions by Anderson, two by Evans, and two by King. Two additional bonus tracks written by Anderson are included on the digital download and CD editions of the album.

Never Stop II was tracked live in the studio with no overdubs, guided by longtime engineer Pete Rende in September 2017 in New York City. The new lineup rehearsed over several months to prepare the new material and get a feel for improvising together. The resulting record confirms the original band members’ idea that The Bad Plus could have a new life while retaining its democratic, leaderless group aesthetic — three composers, three identities, coming together under the umbrella of a band to create one unified sound.

“That, in essence, is the nature of The Bad Plus,” says King. “When there is no leader and everyone has a personal responsibility to bring their full selves to the table, no matter what the material, the resulting sound of commitment and open-hearted connection is realized. We have the chance now with Orrin to restate our message: there is no leader, there is only the music.”

Anderson’s “Hurricane Birds,” the album’s opener, employs rhythms and tonality that echo his love of electronic music and minimalism — a familiar musical thread that continues with revitalized energy. It features a solo by Evans that immediately frames the band in a powerful rhythmic sphere of unity.

Evans’ composition “Boffadem” features the pianist playing both a Steinway and a toy piano in unison, bringing an element of whimsy to the record. With a swirling polyrhythmic swing feel, the tune extends the band’s tradition of fearless genre-blending.

Fans of the band will recognize King’s “1983 Regional All-Star” as the fourth installment in the drummer/composer’s triumphant athletic song series. This new addition finds Evans thriving in thorny territory — think “Wide World of Sports” meets avant-garde sax hero Albert Ayler — with as much deadpan cheekiness as earnest celebration. With a deep rhythmic pocket reminiscent of D’Angelo’s album Voodoo, the song reinforces a unified sense of beat placement that is a huge part of The Bad Plus’s revitalized sound.

The band has plans to tour as relentlessly as it always has in 2018–19 in support of the new record and the new lineup. Says Anderson, “We feel that Orrin is the perfect component to continue our solidarity and honor what the fans of this band have come to expect: a unique template for improvised music using acoustic instruments and equal voices.”