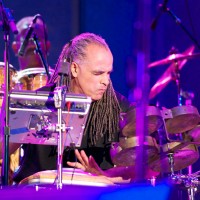 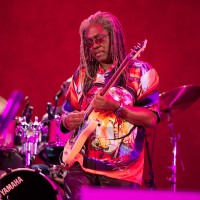 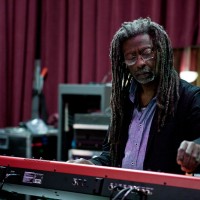 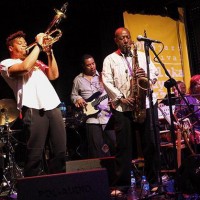 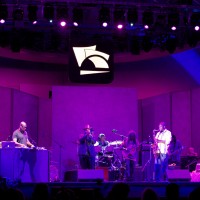 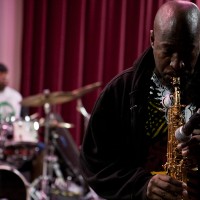 As the first finger taps of the tabla echo off the face of the canyon at the rear of the Los Angeles gulch known as the Hollywood Bowl, something spiritual and magical begins to happen. It is as if the spirits of Miles Davis and the many Jazz masters who have gone on to glory have been summonsed to a command performance. They willingly arrive one by one bestowing their blessings upon this ensemble of world-class musicians brought together to both revisit and renew the innovation of the legendary Miles Davis. Like a new millennium church tent revival, the Hollywood Bowl begins to transform into a living-breathing testimonial to the power of musical genius. Ladies and Gentlemen, presenting the Miles Electric Band.

Magical Martyrs
It was the winter of 2011 when the call came. Vince Wilburn, Jr, nephew of jazz icon Miles Davis and drum master in his own right, received an inquiry from the Chicago Jazz Philharmonic regarding a performance in conjunction with the “Miles Davis Festival.” The festival would be a four month long celebration of the music of Miles Davis. Presented by the Auditorium Theatre of Roosevelt University – the oldest theatre in the city – the festival would consist of nineteen performances held in sixteen venues across the city January to April 2011. Wilburn, Jr. who recorded and toured with his uncle from ’84 – ‘87 and who, along with his first cousins Erin and Cheryl Davis is responsible for Davis’ legacy as executors of his estate, jumped at the chance to perform. Wilburn, Jr. shares, “Ironically, though I was born and raised in Chicago, when I toured with Miles, we never played Chicago, so the Chicago Jazz Philharmonic presented a chance to fulfill a life-long dream.”

Beginning with the idea of reassembling the band which had performed “Bitches Brew Remix” (honoring the 40th Anniversary of Bitches Brew) in August of 2010 during LA’s Sunset Junction Festival, Wilburn, Jr. began placing his calls starting with bassist Darryl Jones, testing the waters one by one until he had assembled a stellar cast to breathe life into the music of Miles Davis’ electric period.
Prior to the debut performance, excitement and momentum began to build for the show. A visit by Wilburn, Jr. to WGN-TV for a lunchtime sit-down to discuss the evening’s performance was the tip off that something very special was about to happen. And happen it did, as scores of Miles Davis fans from Wilburn’s old neighborhood and across the city packed Martyrs, a north side Chicago venue borne from an old post office building and known for it’s commitment to live music. So many people poured in that evening that the Fire Marshall threatened to shut down the festivities. But, as is the rule in the business, the show would go on exceeding the expectations of everyone involved, fueled by magic and igniting the flame for what was soon to come.

The Bitch is Back
The idea that something noteworthy was possible that evening in Chicago was not lost on Vince Wilburn, Jr. and his circle of friends. At producer Gerald McCauley’s suggestion, the performance was recorded. Upon playback from the very first note, it was clear that the time had come for this group.
Apart from Bitches Brew material, the band had started to pick up music from all over Davis’ electric period, and it was time to reflect that adaptation in the band name, which was soon changed to the Miles Electric Band.

Road to the Bowl
As is the case with anything extraordinary, news from the band’s appearance in Chicago’s Miles Davis Festival filtered back to Los Angeles. Not soon afterward, the Hollywood Bowl called looking to feature the Miles Electric Band as part of “A Celebration of Miles Davis,” an evening tribute to Miles Davis featuring signature periods of his career. Vince Wilburn, Jr. then began the process of alerting the personnel. The chance to make magic again was still fresh, and despite the players’ own grueling tour schedules they each agreed to clear their calendars for the Bowl on June 27, 2012.
The Miles Electric Band is an eleven-member ensemble of world-class talents featuring performances from a unique roster of players. As a futurist, Miles Davis pushed his musicians to be innovative and forward thinking, never looking back, therefore the Miles Electric Band revisits the repertoire from Davis’ electric period as a framework for modern Jazz innovation. Miles Davis alums include on piano two Grammy® nominees John Beasley and Robert Irving III, Grammy® nominee Badal Roy on tabla, legendary P-funk guitarist and MD Blackbyrd McKnight, noted percussionist Munyungo Jackson and Grammy® winner Vince Wilburn, Jr. on drums. Also filling essential roles in the cast are bassist Darryl Jones, recognized for his recordings with Sting and decades long tour duty on bass for the Rolling Stones, percussionist Mino Cinelu who’s music score was recognized at the Cannes Film Festival, Antoine Roney on saxophone who has toured the world with jazz veterans Freddie Hubbard and Elvin Jones, rounded out by the electronic flourishes of hip-hop turntablist DJ Logic.
Drawing upon the enormous pool of talent influenced through the decades by Miles Davis, trumpet duties will by design be handled by special guest artists. In Chicago and Los Angeles, Grammy® winning trumpeter Nicholas Payton was featured, and at Sunset Junction it was Grammy® winner Wallace Roney, with other Jazz heavyweights set to join in the future.

Beyond The Bowl
As the band exited the Bowl stage an ecstatic Herbie Hancock, the evening’s host, declared the show was “Incredible!” According to Daily Variety, ”Everyone rocked and socked, and it wasn’t nostalgic in the least…”
The Miles Electric Band had indeed managed to capture the Jazz icon’s spirit of innovation.
For Miles Davis fans, it should come as no surprise that his spirit was in the air that night anointing a new generation. Davis’ last performance was at the Hollywood Bowl in August 1991 just one month before he died. It was finally time to let the music live again. The Los Angeles Times noted “the ever-evolving trumpeter never looked back, so contemporary interpreters better keep an ear to the present.”

Postscript:
As Wilburn, Jr. and Davis’ adult children formulate plans for the future, the Miles Electric Band is now a featured part of the portfolio bringing his music to a new generation of music lovers through festival appearances and recordings. The June 2012 launch of the Miles Davis Forever postage stamp has ensured a certain awareness, as does the Antoine Fuqua directed bio-pic currently in production starring Academy Award® nominee Don Cheadle with original score by the legendary Herbie Hancock.