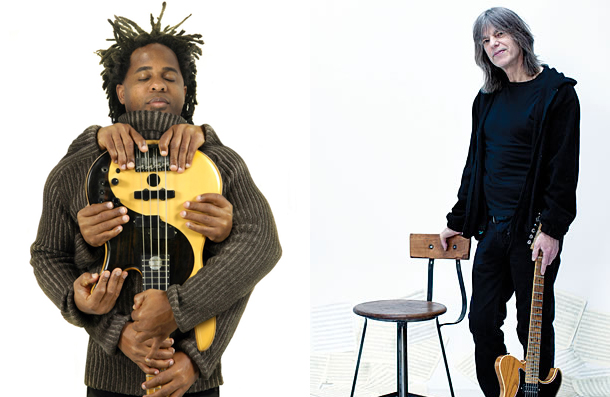 STERN BIO: One of the premier guitarists of his generation, the three-time Grammy nominee was born on January 10, 1953 in Boston. After growing up in Washington D.C., he returned to Boston to study at the Berklee College of Music and got his start as a guitar player with Blood, Sweat & Tears at the age of 22. Following a stint with Billy Cobham’s powerhouse fusion band from 1979-1980, Mike moved to New York City and was recruited by Miles Davis and played a key role in his celebrated comeback band of 1981 (which also included bassist Marcus Miller, drummer Al Foster, percussionist Mino Cinelu and saxophonist Bill Evans). During his three-year period with Miles, Mike appeared on three recordings with the jazz maestro – Man With The Horn, Star People and the live We Want Miles. From 1983 to 1984, he toured with Jaco Pastorius’ Word of Mouth band and in 1985 returned to Miles’ lineup for a second tour of duty that lasted close to a year. In the summer of 1986, Stern went out on the road with David Sanborn and later joined an electrified edition of Steps Ahead which featured Mike Mainieri on midi vibes, Michael Brecker on the Electronic Wind Instrument (EWI), Darryl Jones on electric bass and Steve Smith on drums. Stern made his first recording as a leader for the Japanese Trio label (1985’s Neesh) before making his debut on Atlantic Records in 1986 with Upside Downside, featuring such celebrated colleagues as Sanborn, Pastorius, saxophonist Bob Berg, bassists Mark Egan and Jeff Andrews, keyboardist Mitch Forman and drummers Dave Weckl and Steve Jordan. From 1986 through 1988, Mike was a member of Michael Brecker’s potent quintet, appearing on Don’t Try This At Home.

WOOTEN BIO: Victor Wooten redefines the word musician. Regaled as the most influential bassist since Jaco Pastorius, Victor is known for his solo recordings and tours, and as a member of the Grammy-winning supergroup, Béla Fleck & The Flecktones. He is an innovator on the bass guitar, as well as a talented composer, arranger, producer, vocalist and multi-instrumentalist. But those gifts only begin to tell the tale of this Tennessee titan. Victor is the loving husband and devoted father of four; the youngest sibling of the amazing Wooten brothers (Regi, Roy, Rudy and Joseph), and the bassist in their famed family band; the student in the martial art of Wing Chun and the nature survival skill of Tracking; the teacher of dozens of Bass players at his acclaimed annual Bass & Nature camp; and the master magician. Victor Lemonte Wooten got to music early, growing up in a military family in which his older brothers all played and sang. By the time he was 3, Victor was being taught bass by his oldest brother Regi, and at age 5 he was performing professionally with the Wooten Brothers Band. He recalls, “My parents and brothers were the foundation. They prepared me for anything by teaching me to keep my mind open and learn to adapt.” Working their way east from Sacramento, the band played countless clubs and eventually opened concerts for Curtis Mayfield and War.